A true treasure in Highland Park was the grand old pecan tree on Armstrong Parkway at Preston Road. This mammoth tree was approximately 75 feet wide by 75 feet tall and was over 140 years old. This legendary tree succumbed to age and disease. Due to its large size and fragile state, removal of the tree was necessary for the safety of residents and traffic in the area. The grand old tree was removed on Monday, October 21, 2019.

In 1843, Dr. John Cole of Virginia and the first physician of Dallas County, acquired 410 acres as a headright from the Republic of Texas. He began buying additional acreage that included the area that would become Highland Park and part of University Park.

The pecan tree was discovered by Cole’s son Joseph Cole while planting corn, when he unknowingly plowed over a small pecan tree. The story goes that Joseph Cole, having come home from the Civil War witnessing so much destruction and killing, staked the tree up to protect it, and hand-watered the pecan tree as a testament to life. In 1888, Joseph Cole, sold 294.9 acres to the Philadelphia Place Land Association, with the understanding that the purchaser would continue to protect the tree. The land on which the pecan tree stands was acquired by John S. Armstrong in 1908, for $21 per acre.

When developing the town years later, it is reported that Hugh Prather, Sr. was offered a million dollars for a lot that would include the pecan tree. His sons-in-law, Edgar Flippin and Hugh Prather, hired the noted city planner George E. Kessler to design a parkway to protect the tree and provide it with a place of honor at the entrance of town

And because of the story, it became known as the "Million Dollar Monarch. The first lighting of the pecan tree occurred during the Christmas holidays in 1927 by Flippen-Prather Realty. The tree has been adorned with lights every holiday season since, except during World War II and during the 1973 energy crisis. The lighting of the tree is recognized as the oldest community tree lighting tradition in Dallas County.

The first lighting of the tree occurred during the Christmas holiday season was by Flippin-Prather Realty in 1927 to promote their new development, Highland Park West. The tree has been adorned with lights every holiday season since, except during World War II. and during the 1973 energy crisis. The lighting of the tree was recognized as the oldest community Christmas tree lighting tradition in Dallas County. The tree required four men and almost one week to decorate with over 5,000 red, blue, orange, and green Christmas lights. 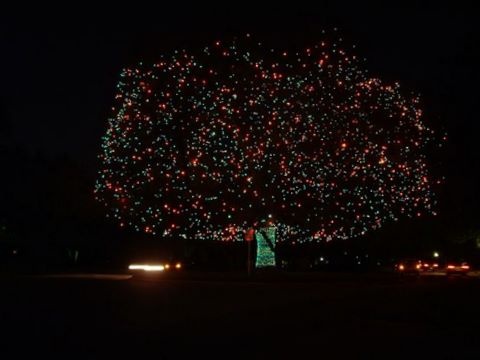 The Town’s "Monarch Pecan Tree" lived at Armstrong Parkway and Preston Road for more than 150 years. Approximately 70 years ago, a sapling, grown from the Monarch itself, was installed on January 20, 1951, next to the Monarch. It was lovingly called the (little) sister pecan tree and not honored with an official name. As the Monarch Pecan Tree’s presence is passed to the younger tree, it was named the Landmark Tree.